C is for Cards

(Or as I like to think of it, Concentrated Array of Relevant Data)

There are really two kinds of cards I'll talk about here. The first is the 3x5 card I mentioned a couple days ago. I've started using them, and they're great at concentrating the focus of the task at hand.

The other kind is the card that comes with the game Freedom in the Galaxy (see examples). 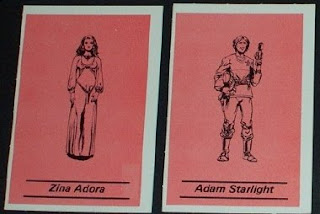 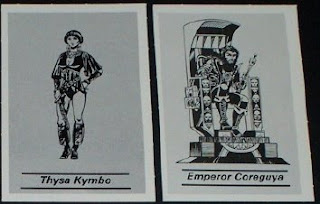 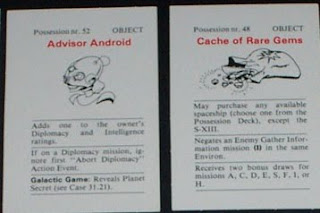 Zina Adora and Adam Starlight are clearly the stand-ins for Princess Leia and Luke Skywalker. Emperor Coreguya and Thysa Kimbo are non-Star Wars creations (since "The Empire Strikes Back" hadn't even come out when FitG was released). The Advisor Android might be a C-3PO analogue, and the cache of rare gems allows bribery or something (the errata notes it disappears after one use).

I like this approach. A lot of the info that the game contains is on the cards or the tables; as a result the rulebook is still only 32 pages. (Sure, that's long for a wargame, but if the info on the cards was included, it'd 64 pages at least! Additionally there would be much cursing and page-flipping attendant on each game.)


Then, you look at Magic: The Gathering, and the whole game is on cards!

I'm not going that far. I'll stick to character sheets and dice, thank you very much.

But I do like the idea of putting the things that don't go on character sheets on cards. Each possession, for instance, will go on a card. When a character has that item, he holds the card. (Between play, I'll paperclip it to the character sheet.) Each Imperial character will have a card, too -- which is not to say that I won't eventually make up a character sheet for each, but I shouldn't need it for routine play.

I'll also put the rebel characters on cards -- that way, I can surreptitiously make notes while the character is being played and the player might not know anything about it!


I'm also toying with the notion of putting the major elements of my adventures (aka "Missions") on cards, so that I can flip through them easily and not let some huge pile of papers intimidate me behind the screen.


And I also specifically bought colored 3x5 cards, so I can easily distinguish between types.

So, yeah, not that ground-breaking, I know. But I got C done! That's 3 days in a row. Better than my last effort.
Posted by Will Douglas at 9:00 PM

I use CCG style cards for character "sheets", Monsters/NPCs, Spells, and Items. I'm a big fan of this approach. :)

A really nice blog where we can found useful information.Thanks you.
We are one of the top-notch Exporters of Fresh Fruits vegetables from Pakistan.
Fresh Fruits Export from pakistan
sindhri mango from pakistan