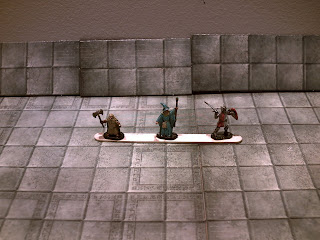 Here they are, my new pictures. As usual, click to enlarge.

For those of you who read my last post, you'll understand why I didn't get more painting done. But I got the important stuff done, at least for Kesher's Otherness game: I got a figure painted for my character, Melvin. He's the guy in plate and the red and white surcoat on the end. I also painted my other Mage figure, because we have two of them in the party (and now we'll have two painted figures). And the dwarf, because we have a dwarf (sometimes).

I have an elf and some 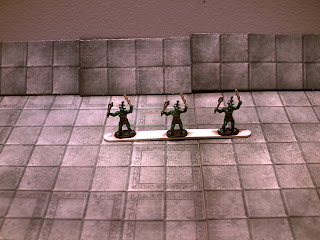 more human fighter types to paint up before the next game (maybe more than one elf -- we seem to have a few of them).

We haven't faced any orcs yet, but when we do, I have some figures ready!
Posted by Will Douglas at 9:25 PM

Man, I really need to clean up my basement so I can add to the pile....

Melvin looks great! Max'll be excited to see these...

Yeah, I'm happy with the way they came out. I'm working on goblins next.

BTW, when are we playing next? Is it this Sunday? Because I forgot to get back to you about the basement here -- I think we should still go to the Source. But, you gotta get the word out!