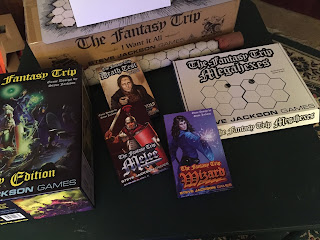 The Fantasy Trip Legacy Edition kickstarter has started shipping. I got mine yesterday! It's a pretty big box (lower left) that shipped in a much bigger box (top).

All I can say at this point is WOW! There is some really nice stuff in here, and the physical quality is right up there at the usual high standard we've come to expect from Steve Jackson Games.

This was the first roleplaying game I ever owned, back in the day. I've always wanted to see it back in print, and now here it is.
Posted by Will Douglas at 5:02 AM 95 comments:

For those of you who would be interested but haven't yet heard, there's a new wargaming comic called Solo Napoleon.

I like it and am happy to advertise it here, because we need more good stuff in the world.
Posted by Will Douglas at 2:03 PM 57 comments:

For the 40th Anniversary of D&D, I played in my regular, twice-monthly AD&D game.
We couldn't find the stuff we had that we'd brought into the dungeon (but was taken off of us in a previous Half Party Kill (hereinafter known as HPK, as opposed to TPK).)
But we went back over the map, checked out every place we had been, throughout the entire (small) dungeon, and found the one thing we had missed. We found our MacGuffin, our lost gear, and some treasure they'd taken off of other hapless adventurers previously.
In short, it was good old fashioned dungeoneering that saw us through. Not skill rolls, not pleading with the DM, not any of that. Going over the same old ground to see what we missed (and burning up the torches so we could see what we were doing -- yes, we keep track!)
It's not the thrill of killing a Dragon, that's true. But it IS the thrill of thinking our way through the problem. And that's better.
Because that is what D&D is all about.﻿
Posted by Will Douglas at 11:49 PM 64 comments:

Not only am I updating this blog again (well, this once anyway -- we'll see how it goes...), but Fight On! is back as well!

I've already flipped through the pdf, and there is a lot of old school goodness in here. Here's the press release:


Bloodied and staggered on the 66th level of Maure Castle, somehow, after a 2-year hiatus, we found the will to Fight On! This issue of our fabulous fanzine is packed with all the magic, monsters, mayhem, and miscellany you've come to expect to take your FRPing to the next level! Dedicated to Rob Kuntz, our fantastic authors and artists include Lee Barber, Patrick Farley, Jeff Rients, Gabor Lux, Peitsa Veteli, Kevin Mayle, Douglas Cox, Chris Kutalik, Jennifer Weigel, Kelvin Green, Tom Gordon, Michael Curtis, Sniderman, Calithena, Richard Rittenhouse, Hudson Bell, Michael Mornard, Baz Blatt, Jonathan Linneman, Simon Forster, and many more! Let's face it - no matter how old we get, Fight On! still punches harder than Ivan Drago wearing a Girdle of Storm Giant Strength. Grab your copy today!You can obtain the TRULY old school dead tree print version here: www.lulu.com/shop/ignatius-umlaut/fight-on-14-20122013/paperback/product-21411537.htmland the formerly not very old school but now kind of old school due to the popularity of the Kindle and Epub fomats PDF here: www.lulu.com/shop/ignatius-umlaut/fight-on-14-pdf-version-20122013/ebook/product-21411519.htmlThank you for your time and consideration. Fight On!
Posted by Will Douglas at 7:01 AM 40 comments:


For many months I've just been a player, not running anything. It's my default state, really. But every once in awhile I want to run a game.

The problem, of course, particularly for me, is that there are just too damn many great games out there! It's like Schroedinger's Cat. There is a large probability wave of different games I could run, but each time I move toward one, another calls out to me.

I've spoken about this in the past to a friend of mine who is both in my face-to-face AD&D game and also works with me. So last night at the game, while we were trying to decide what to do next ...


... a little background here. When last we left our intrepid heroes, half the party was down, either dead or dying. The rest of the party was trying to kill three will-o-wisps. Not the easiest of challenges.

One player had to drop out for a while for family reasons, which brings the group down to a more manageable 7 altogether.

And we kind of all agreed that things weren't going the way we all wanted them to, and we needed a change.

We all still have faith in our DM, that's not the issue. But interparty things have occurred.

We need a change, and we'd like something different to cleanse our palates ...

I opined that if I were to run something, it wouldn't be AD&D. My co-worker shortly thereafter suggested that I run Champions (second edition -- it's the one I'm most familiar with).

This met with general approval, and before I knew it I had been shanghai'd.

The probability wave has collapsed, and the game is Champions.

I came home and dug out my vintage Champions gear, and am getting ready to run a few adventures using it for the first time in literally decades.

And I couldn't be happier!

And that's awl she wrote...

In last night's DCC game on G+, one of the characters had but an awl for a weapon. That was awl I needed to get the awl puns flowing. When he lost the weapon, I said: "He gave it his awl."

(There was another, but I've forgotten it.)

The great thing about G+ gaming is that nobody can throw dice at my head when I do that!