Must have been in Mercenary...

Finally, for the first time in around 20 years or so, I have a copy of the revised edition (1981) of Traveller Book 1: Characters and Combat.

This is like the one I originally had, back in the day. I loaned it to a guy and never saw it again. Bastard.

Anyway, I could have sworn that it was in there somewhere, that if a Marine character got Blade Combat as a skill and wanted to specify it as any blade weapon other than the Cutlass, that he had to roll something (11+ if I recall) to "buck the customs of the service" and do so -- otherwise, he had to take the skill as Cutlass.

I loved that little rule. It said so much about the Marines as a whole, right there.

Anyway, I also got a copy of the rules and map (but not the box or the counters) for Snapshot, which was the boardgame of personal combat aboard spaceships.

I haven't decided yet if I'm going to set this in the Official Traveller Universe or not, but I really don't want to use any of the expanded character generation from Book 4 and beyond.

Also, I really don't know when (or even if) I'm going to run this. But it'll be nice to know I have it, in case an opportunity comes up.
Posted by Will Douglas at 2:39 PM 4 comments:

Rather than trying to write a better review than Grognardia, I figured I'd just post a link. Go read it.
Posted by Will Douglas at 8:15 AM 1 comment: 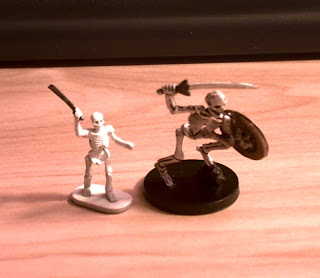 As you can see, I took to heart the fourth lesson from my last post. ;)

Anyway on the left is one of the skeletons from the Caesar Miniatures Undead package.

On the right is the skeleton from the D&D Basic Game (3.5 edition) from Wizards of the Coast. Now, this guy is crouching down (an artifact of the plastic they use, I think, or else he's just that way because he was smushed) or else you'd see that the Caesar fellow is about 2/3 the height.

In another, unphotographed, comparison, he's a bit taller than a Halfling Brawler, if you're familiar with that figure.

Now, the WOTC figs are somewhat taller than the old 25mm "standard". This scale creep is sometimes called 28mm, Heroic 25mm, or even 30mm.

My figures may be much smaller, but at least I can carry more of them for less weight and in a smaller box, to boot.


I didn't get around to doing any dipping last night. Tonight, I hope -- the stuff requires adequate ventilation, so I generally do it outdoors. We'll see.
Posted by Will Douglas at 7:53 AM 8 comments: 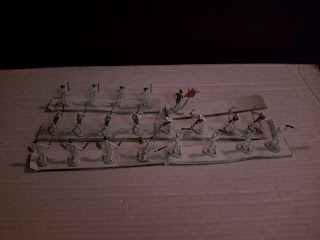 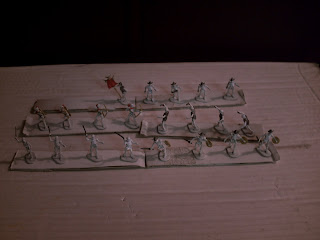 The first lesson I've learned about photographing miniatures is: Don't do it late at night when you're tired.

The third lesson I've learned is: Use a tripod.

The fourth lesson I've learned is: Use enough light.


These photos reflect the application of the first three of those lessons.

These are my skeletons. First the back, then the front.
Posted by Will Douglas at 7:51 AM 2 comments:

I never said I was a great painter, but apparently I'm a really lousy photographer.

I took a picture of the primed skeletons, and then two more of them when they were painted.

And none of them came out well at all.

They're blurry, the detail is all lost (and I was even using the setting on my camera for close up work, too!).

But the painting looks okay.

I'm going to let them dry for a day and then dip them.

And I'll have my girlfriend take the pictures when they're done; her pictures always seem to come out okay.
Posted by Will Douglas at 11:21 PM No comments:

A painting we will go...

I have to start painting my Caesar fantasy miniatures sooner or later, so I might as well start tonight.

I found my primer last night and primed up the skeletons (scroll down on the link above until you get to the Undead). We'll see how it goes; I've never painted 1/72 plastic figures before.

There are a few painting guides out there, but I'm a bit leery of trying to use Elmer's Glue as a primer...anyway, the regular stuff I use (from the Armory) seemed to stick okay. The problem of course with plastics is that they bend, and when they do, the paint flakes.

And anyway, I'll be using Miracle Dip as a final coat, so that should hold everything together.

Pictures tonight when I get something done...
Posted by Will Douglas at 12:44 PM 2 comments: 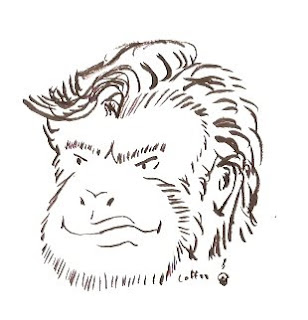 I had never created a character for Encounter Critical. Until now, that is.

For those of you who don't know, Encounter Critical is an absolutely brilliant game designed by a pair of crazies in Wisconsin back in the late 70s. Except, of course, that it's not. It was really designed by S. John Ross, of Risus fame, as an homage to those games of yesteryear, and (incidentally) as a hoax.

We now know the truth, but still the game is beloved by a rare few who "get it". I'm hoping I'll be one of those few. Right now, I'm still in the early stages. (I went through this with Risus, as well, so I think I know how it goes...)

This is for an online EC game that's going to happen over at the RPG site. Here's the link to the sign-up thread over there, if for no other reason that I don't forget it:

I first got Traveller in about 1982 or so. I'm pretty sure that was the year.

It was the second edition, which I didn't know at the time; I doubt if I would have cared. There were these three awesome looking black books with a bold red stripe and the title.

There was the text on the cover of the box, the distress call from the Free Trader Beowulf. To this day it gets me going.

One day, a guy in my group asked if he could borrow my copy of Book One. I said sure.

I never saw it again.

Many years later, I was at my Friendly Local Game Store and found a copy of Book One in a used bin. For only two dollars! Woo-hoo! They had Book Three, also, and since my stuff is all stashed away somewhere, I bought them both.

They turned out to be the originals, from 1977.

Once I had found out that my original set was the second edition, I had always wanted to see the first edition. I like to know where things come from. Also, whenever people come out with a second edition, there's something from the first that they only put in part of, and it always bugs me.

In this case, my old Book Two discussed space combat. It said that Pulse Lasers weren't as accurate as Beam Lasers (which cost twice as much). But there wasn't a damn thing in the actual combat system to differentiate.

Well, I finally got a copy of the original Book Two, and it gives a DM (die modifier) of -1 when using Pulse Lasers. (I've since gotten the Starter set, which was the final version of the three little books, and it gave this DM as well as saying that Pulse Lasers do two hits instead of only one, like Beam Lasers do. Weird.)

So, I have both the last produced and the first produced versions of the original Traveller set (without the complications of the subsequent books, which in my opinion drastically messed up the beautiful simplicity of the original set...and the silly buggers at Mongoose are doing the same thing over again, it appears! Those who don't know history, and all that.), so I have a variety of options here.

What I'd like to do, though, is create my own mini-campaign (or setting, anyway), just using the three original books, as the sole rules for the game. No Official Traveller Universe (OTU), no supplements, no nothing.

This is to be in keeping with my 'old school gamer' -ness. I'd take it round to conventions and show people how it used to be done.

But I'm growing to like the OTU, which I've always looked askance at. It does what it needs to do, and there's a certain nostalgia for how it was back before MegaTraveller and all that.

Other points of difference between the first and second editions:

Jump Drives in 1e didn't need power plants; in 2e they did.

In 2e your computer number had to be the same as or higher than your jump number; in 1e it didn't (and the ship designs of the era show this).

Small craft fuel was completely different; craft burned fuel at a rate of 10kg per G per turn. Fuel tankage was considerably higher.

Book Three had a table for determining comm routes (like the ones on the maps GDW produced). It also said that the 8x10 mapping grid was a "convenient size", not absolutely mandatory as later. (And, given the size of the Third Imperium, it also noted that one or two such subsectors should be adequate for years of adventuring...!)
Posted by Will Douglas at 11:36 AM 4 comments: