I've been thinking about this for a while, and I gotta say -- I'm pretty much through with ten sided dice.

I don't have any problem with dice that produce a 1-10 result, I just don't like the pointy little non-platonic bastards that keep stabbing me in the hand.

That's why I bought a set of these: 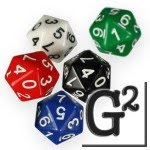 Twenty siders, numbered from 0-9 twice. Found 'em on ebay. These are the style of dice you used to get back in the day, but made of modern materials (i.e.; they won't start wearing away immediately).

They just feel better. They probably don't roll any more randomly, but I don't care. I'm happy with them and that's what matters to me.

One potential drawback for the uninitiated would be using them as percent dice. But once again, I remember from back in the day: The colored die is the tens digit and the white die is the ones digit. It's a simple as that. (The Top Secret rule book said so, in so many words.)

(I knew one guy who would call which die was the tens die while they were in the air. Sometimes even after they landed. And what he called might be the tens or it might be the ones. No consistency whatsoever, and perilously close to cheating in my book. Drove me up the wall.)


And, in other news, Fight On! number 9 is out. But you knew that already, right? Thought so.
Posted by Will Douglas at 3:18 PM 6 comments: