...for a few days. (Not that you'll be able to tell; I'm not the most frequent of posters to begin with. Whatever.)

Anyway, I'm getting married. Tomorrow. And then we're off to sunny Las Vegas for a bit of a honeymoon.

I won't be totally away from the internet, of course, but I'll be away from my home and all my beloved games (I'm traveling light, so the most I'll take will be pdfs -- and a few dice; hey, a game might break out sometime, right?)

Anyway, take it easy yourselves for a few days. I'll be back before you know it.
Posted by Will Douglas at 12:12 PM 11 comments: 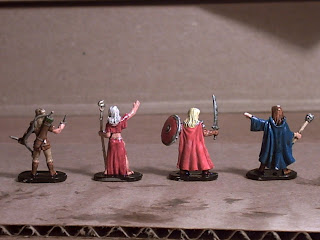 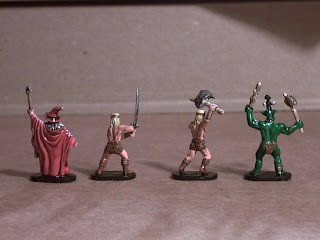 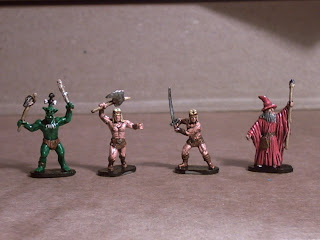 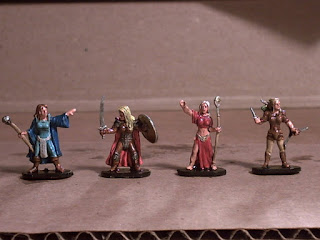 I had a request for close up pictures of my figures, so I tried it. Whaddya know? The digital zoom on my camera works pretty well. Here we go!

The pictures get imported funny; they're not in the order I asked for them. Oh well. They should be pretty obvious, anyway.

The women are, from left to right, a Cleric, a Fighter, a Magic-User and a Thief. At least that's how I see them. (From behind they're the other way around.)

The men you've already seen, although here you can see them better.

I'm kind of impressed with how these have all come out. I'm happy that I have a consistent methodology:

A) to produce figures suitable for actual play,

B) that doesn't take a long time to complete, and

C) that gives me figures of a decent quality (i.e.; I don't have to hang my head in shame when compared to the "real" figure painters).

What do Mark Twain and Dave Arneson have in common?

For one thing, the rumors of their deaths were greatly exaggerated; Dave is still with us (as of my latest information). (Mr. Twain, obviously, is still dead. But nobody really expected otherwise.)

But both men wrote. They were both Americans. They both clearly had a great sense of humor.

Dave Arneson may not be the household name that Mark Twain is, but around my household he certainly is.

I'm glad he's still with us.
Posted by Will Douglas at 4:00 PM No comments:

I just heard that Dave Arneson passed away.

He was the guy who started it all. Without him, we wouldn't be here.

I'm sure those who knew him well will have eloquent eulogies for him. I only just met him a couple of times, both up at The Source. He was pleasant, and cheerfully signed the things I brought with me. (First Fantasy Campaign, Blackmoor, and the Dungeon Masters Index)

I can think of no more fitting tribute than to say that I'm going to keep right on playing and having fun. I think Dave would have wanted that.

And with that in mind, more pictures! Sorry they're out of focus -- they're better than the first ones I took.

This is a mini-battle scene, showing the Barbarian Hair Brothers against a Barbarian Orc.

All figures are from Caesar Miniatures, from their Fantasy line. Click to embiggen. I think the necklace of teeth on the orc came out really well. And I had to make the barbarians blonde, because their heads just looked so 80's hair band (they look blow-dried, don't they?). Next up will be some female characters from the Adventurers set, the ones I take as a Mage and a Cleric. 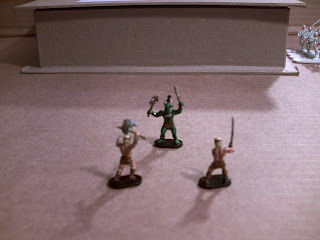 Anyway, hug someone you love today (especially a game designer). 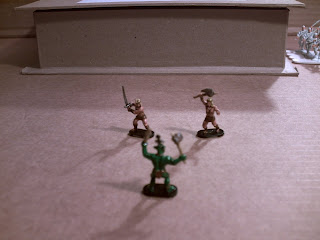 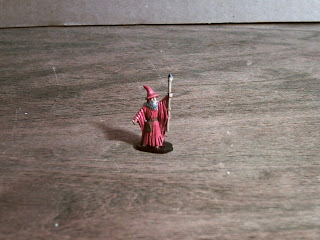 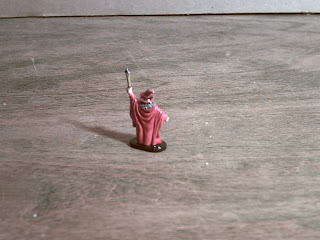 Here's the mage from the Caesar Miniatures I bought way last fall or summer or whatever. I finally painted him. (Click photos to embiggen.)

Actually, the reason I waited this long wasn't mere laziness. I wasn't sure how to prime the silly bugger. But then I came across the Junior General. And they led me to learn that Krylon makes a paint, called Fusion, that specifically bonds with plastic. Good stuff! And it's a buck cheaper than the primer I just bought at the gaming store...

Anyway, here he is, Fusion primed and miracle dipped.
Posted by Will Douglas at 6:09 PM 5 comments:

Here's my new avatar! Let me know what you think.
Posted by Will Douglas at 12:43 PM 5 comments: