G is for Galaxy Map

If you're new here: This whole A to Z blogging lark was supposed to take place during April. Well, that didn't work for me, so I'm doing it now.

Our subject is using the old SPI wargame Freedom in the Galaxy as the basis for a roleplaying game, using the Chaosium's old Worlds of Wonder boxed set as the basic rules.

What I'm doing with the A to Z is exploring different aspects of this project as I work on them. This is all a work-in-progress, but I'm confident it'll lead to somethign cool.

As always, comments are invited.


This is the map for Freedom in the Galaxy: 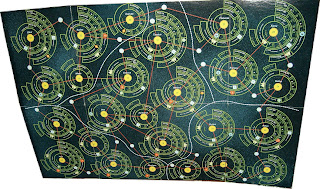 Just because characters are in on environment on one world, doesn't mean that the inhabitants of the other environment(s) will be affected by what they do.

Additionally, not all characters are suited to visit all environments. (Since it's a wargame and not a roleplaying game, the rules leave out such inconvenient things as gravity and atmosphere -- but then, so does Star Wars, so we're good there.)

Each world has its own native races, some of which are star-spanning races. These are important for the 'domino effect' which can accelerate the rebellion (and, in the wargame, is something much to be desired by the rebel player -- pity I didn't think of that when I did "D"!)

Travel about the galaxy is accomplished through Hyperspace (about which more tomorrow). But once you've got there, what do you find?

Each world has an Orbit box. Ships, characters and troops in orbit can venture down to the
planet's surface or leave and enter hyperspace to visit another world.

There is also the matter of detection.

It is possible for orbit to contain imperial vessels and for the player characters to still evade detection. But it isn't necessarily easy.

Once a character is "spotted", he can be targeted. (N.B.: This works both ways; player characters

will want to spot enemy characters...) This can lead to assassination attempts, capture, whatever wild scheme I'd like it to.

So, you don't want to get spotted. (And I'll be looking for player ingenuity to evade/avoid such things...)

You also don't want to fail on too many missions. Fortunately, there are a flock of player characters out there (the wargame comes with 20 rebel characters). So, one bad mission won't spoil the whole rebellion.


Right here, I'd like to state something I don't believe I've mentioned so far: This is NOT some 'story path' or 'plot point' campaign. This is a sandbox. I haven't made any assumptions about what's going to happen. I don't know if there will be a happy ending for the rebels, or if they will all die horribly in an imperial prison.

The proof of the pudding, as they say, is in the eating. (But I don't really want to waste the letter P on pudding...)
Posted by Will Douglas at 9:49 PM

I forgot how awesome that board is, with all the nested circular slices. Very science fiction-y.

Yeah, my wife likes it, too.

It's currently hanging on the living room wall, as art! (I put all my best maps in poster frames.)

Oddly enough, the circular slices have drawn the most criticism, since they don't line up -- you can't tell at a glance how a system is doing.

There's a whole community over at BoardGameGeek working on redesigning the game. Their map looks pretty good, too, but it doesn't have the circles.

A really nice blog where we can found useful information.Thanks you.
We are one of the top-notch Exporters of Fresh Fruits vegetables from Pakistan.
Fresh Fruits Export from pakistan
sindhri mango from pakistan